Oh Yea, fire me up! This is one hot Double Nickel with plenty of performance and style! Can you say "Ready to Rumble"? A real Firecracker full of Show-N-Go! Let's get on with it, Ok? 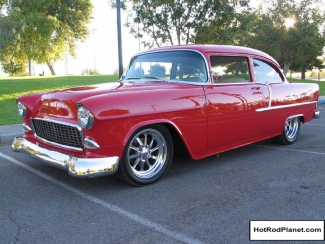 1955 Chevrolet Bel Air 2 dr Hardtop: Super Slick with Tons of Eyeball! Man Oh Man! Talk about reach out and grab ya! This dude had me wanting to get out my Vitalis and slick my hair back in the reflection of it's slick deep Royal Blue Metallic finish! Take a real close look and you can even see the clouds in the sky! Who needs a red or black car when you can be different from the rest! There is nothing like a 55 Bel-Air Two Door Hardtop that looks good and even better than that, it's ready for today's high speed driving adventures! 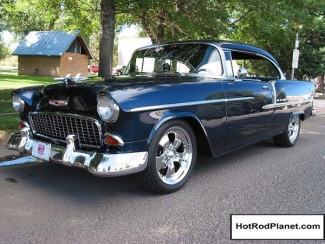 Man Oh Man! Talk about reach out and grab ya! Stop Already! Get in and hold on for a ride that will make ya feel warm and fuzzy (drool factor+)! Flex yer muscles Popeye and mash the pedal! Ok it's not really that fast but it does have a few more ponies than a small block, would'nt ya think? Read on for more... 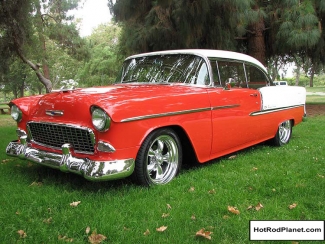 This is the one everyone is looking for! Sweet! Let's face it, double nickels of this quality are becoming increasingly harder to find! A beauty that retains her classic style and feel while incorporating all of the amenities that makes a road trip and/or anytime use extremely enjoyable! Turn Key Satisfaction! Read on for more! 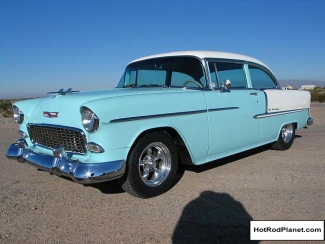 Hey Hey, What do we have here! A Celebrity? YEP!! This Ol "Torch Red" 55 Bird was originally owned by the late Jack Lemmon who was one of Hollywood's most-loved actors! According to Jack Lemmon (see above document) "I received this car in lieu of cash payment for an appearance on the Ed Sullivan Show"--"I was told at the time that the car was one of the first, if not the first, to be delivered to California"! This car has Star Power! Let's stop for a little history of the original owner! 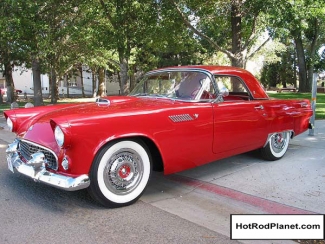