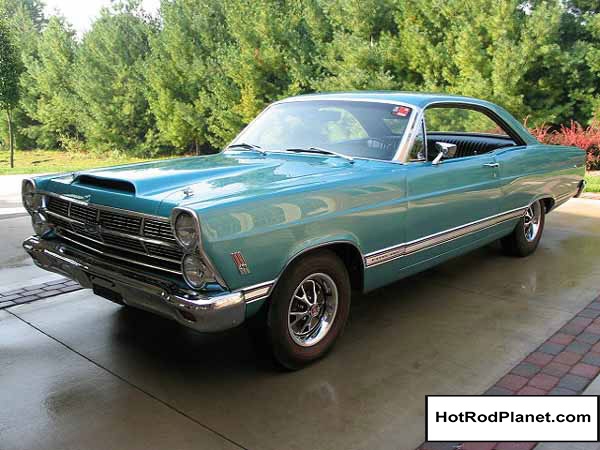 Well Folks, what we have here is a VERY RARE "W" Code 427 410 HP Side Oiler with 4 Speed!!! Pack-A Lunch?.... two reasons, the first one.... as seen in the vintage ads above, Ford Motor Company stated "O.K., Now it's Your Move!", just below the photo in the small print reads "427 V-8 not intended for highway or general passenger use" and/or in other words Pack-A-Lunch to beat this Muscle Car! And on the other hand, #2...., you better Pack-A-Lunch to read all of my detailed text and study the 4 web-pages of over 100 high quality photos of this rare American Muscle Car! Once you have completed yer task, there will be no question as to the quality and rareness of this specimen! Cars like this are very far and few between in any condition!

Let's See, according to Ford Motor Company this vehicle is 1 of 11 with this power-train combination "35W". In a letter from an NHRA tech, posted on the sub-page, you will see this is the FIRST-#1 produced in this power-train combination and as of 5/24/1967, it was one of eight! Upon further research this car has been verified as car #7 in 427 production! Let's see, lucky #"s 1, 7 and 11, "W" code Car #1 of only 11 produced, 427 Car #7 of 230 built! All of these verified documents and a thick file are included with the purchase of this fine piece of American Muscle Car History!

It is always my policy to thoroughly inspect, research and document special vehicles such as this (also see known items below) ! After my in person digital documentation, the extensive file was reviewed and the phone calls began. This car was sold new to a Kenneth K. in Campbellsburg, Indiana on 2-10-1967, I was able to speak to the original owner who still resides in Campbellsburg!! Ken stated" Yes I purchased the car brand new, kept her for about a year and traded her for a Ford pick-up from gent named Henry M. just a short few miles away!" It was neat to talk to the original owner!! My chain stopped there due to the commonness of the 2nd owner name and I moved on to the restorer! Purchased by a Richard S. of Decatur, IL in 1993, Richard was more than happy to discuss what he knew about the car, he went on to say "I picked that car up from a gent @ a transmission shop who had her in storage for many years as a restorable roller which included a complete 427 side-oiler engine/trans! Over the years I have restored over 50-60 Ford Muscle Cars! A complete rotisserie nut-n-bolt restoration (and it shows). The engine was professionally rebuilt with all cylinders sleeved and brought back to standard. I know Fords and hundreds of hours were spent on this correct as possible restoration (see below)! Completed in 94-95, I have done so many, I can't remember each an every detail but it is Real." One contact was to verify the validity of the included letter by Travis M, the NHRA tech (see sub-page 1), who has verified it's production order as 35W car #1 of 11 Produced, with later research showing it as # 7 of 230, 427 Fairlanes Built for 1967!! In 1997 she was to sold to the current owner in Michigan who has petted, protected, shown and driven very little!! Now on its way to you!

In closing, there is no question as to the uniqueness of this VERY RARE American Muscle Car!! Cars of this stature have skyrocketed in value over the years and show no signs of future weakness! The ultimate addition to any collection and a surefire investment! You will not be disappointed!

Known Items: Spectacular rotisserie restoration completed in 94-95 with nothing left untouched! Very few miles since completion, I would say less than 500 miles! The body is whistle straight with great fitment on all panels. The correct Clearwater Aqua factory color finish is probably over done as compared to factory. Some metallic bunching is noted on the upper surfaces (hood/deck/roof) with one thin spot on the RR roof it is very presentable with a no excuses presence! A recent Marti Report and New Door Data Tag is Included! The proper holes do exist in the shock towers (427 bodies only) and it also carries the proper re-enforcing brackets protruding out from under the rear of fender apron near the hood hinges (also 427 car specific ).